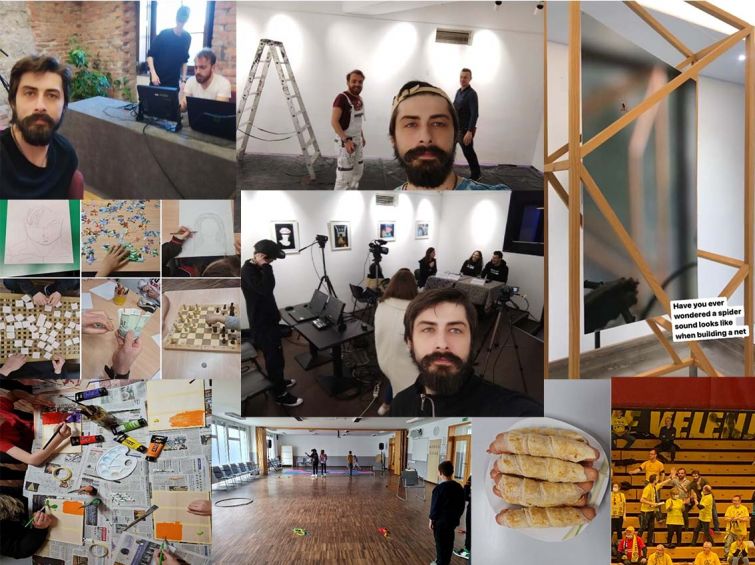 Hey guys! I am Emre from Turkey and I’m 28 years old. Currently I’m volunteering in Mladinski center Velenje. I used to work as a social media context manager but I was ready for Slovenia! I am here to push myself out of my comfort zone.

At the beginning of this week, we were rested and ready to go but it wasn’t like we planned due to sickness. This week was a bit different than other weeks because of the school holidays. Therefore, we worked from 9 in the morning, till 2 in the afternoon for 5 days. We had a place for sports recreation, a range, or if some kids wanted to dance. Furthermore, we had music there all the time.

As you can see in this picture with a wooden board and a few tapes you can create beautiful and different colors of the background. Then, with a few brush movements, you can make a tree. Afterward, you can paint your tree with a beautiful background however you want. Obviously, to build something great, you don’t need to be talented or have a gift. The only thing you need is to be smart about it.

Another thing we had like I mentioned above is a sports and dance range. It’s basically a big space with a lot of things like small balls or other things. You can easily make a similar range and it is up to you to get creative or make a competition. Also, we had space for kids to dance to nice music. Sometimes when there was no one I played some Turkish music and had fun.

When it came to Tuesday, we had to divide our schedule. Our organization needed us to work at one of the Kons Module exhibitions. So, in the morning we were at the afternoon center, then Pekarna where the exhibition took place. In the morning our coordinator Ira decided to cook a meal for the cooking workshop. In my opinion, it is a burek but after, she convinced me it is not a burek. I forgot the name again but you can see in the picture. It is not burek, it is not a hot dog either. There is food between this. Yeah, I know it is interesting. As always, we cooked, ate together, and cleaned. It was very delicious.

In the afternoon I was at Pekarna. The exhibition topic is very interesting. Imagine one could hear when a spider builds a net. Furthermore, one could hear when the spider walked on a net, how it dances with water drops. Bet you could not imagine and I thought the same. Yet, it is really one artist with a vibration microphone who made it, recorded it. Also, he combined it with the sound someone makes when walking with GPS on the phone. I was responsible for opening the exhibition and welcoming the visitors. I have to confess that listening to spider sounds three hours in a row can be a bit creepy but it was quite good.

For Wednesday it was the same thing again, but my friend Seyithan got sick so he had to go home. By Thursday he was okay, but I was sick. We did not have Covid we tested, but our organization sent us home to rest and also make sure that we don’t spread it around. That is one of the things I like about my organization, they care about our health and also for them as well. They are tolerant and flexible.

For the next week, we will have a different schedule for the last 3 days of the week. We will be participating at the international meeting of the project IN NEET. It will be full of different events but I am sure it will be interesting and a good experience. See you next week…

Busy but fun, as always

This week we had a schedule like any other week but we did get some extra work which was fun and educating. Therefore, this week was quite busy yet that doesn’t mean it wasn’t fun.

I, Emre, worked in the afternoon center where we prepared some creative workshops such as making a pen rack from a cartoon coffee cup with ropes. Others were doing creative things with kids. I was also playing chess with some of the kids. They liked playing chess and I didn’t expect them to be good at it. One of the kids beat me very well.

On Tuesday I was in the afternoon center again but that day we had a different workshop. Besides creative things, which we help the kids with whenever they want, we also had a cooking workshop. With the workers of MC and with kids we cooked pasta with sauce. It was fun, we cooked together, we ate together and of course, cleaned together.

After work was done, our friends invited us to watch the handball Euro league game in the Red Hall. I had a lot of fun. We were at the VIP side in the first half but we felt we had to join where the ‘’strict’’ fans were. I go crazy when I watch the club that I support, which is Galatasaray. Because we were speaking English, Slovenian fans thought we came from Spain to support the away team. Therefore, they were sort of hesitant towards us. When we said that we are Turkish and are supporting Velenje, they were like ‘’ahh okay’’. I think this photo explains everything.

After winning the game we went to Max club, which is the famous club of Velenje, and celebrated at the club.

When it came to Wednesday, middle of the week, I was working in My club, which I like. We drank coffee and talked. Then I and my friend were given one extra and fun job, which was painting the walls of the eMCe club under the supervision of Mario. We learned and had fun. We did this for 3 days in the mornings. Thanks to Maruša, while we were painting, we drank coffee and listened to some music. On Friday we completed it and now it is ready for exhibitions.

After working on Wednesday morning, we had a konS event. February was the konS month, there were a lot of events going on. When we worked in Kunigunda Multimedia Center we learned how to record a video, use a camera, and so on. On Wednesday afternoon our job was to record simultaneously to live broadcast on MC’s social media accounts. The artist spoke in Slovenian. Therefore, we did not understand many things. Yet, practically working on what we learned is a good opportunity to get some experience. We prepared before the event, recorded during it, and put everything back after it was done. Working in the field is always educating and fun.

Thursday was more relaxed compared to the other days. My friend Seyithan worked at the afternoon center and did some sports activities with the kids. On Friday, we had a meeting with our coordinator and evaluated the week, and talked about next week. Also, she wants to make sure we are well and satisfied with our volunteering. It was a fun week in the end.

Finally, the weekend came and after the pandemic restrictions were removed, we wanted to party. Also, it was Pust festival week and we expected a big party. While my friend partied here in Velenje I traveled to Maribor where I have already been before. I missed the city and clubs. Saturday, we partied hard. On Sunday we rested and relaxed to prepare for the next week. It was a long week but fun in every way. Thanks to our colleagues, they always make it better. 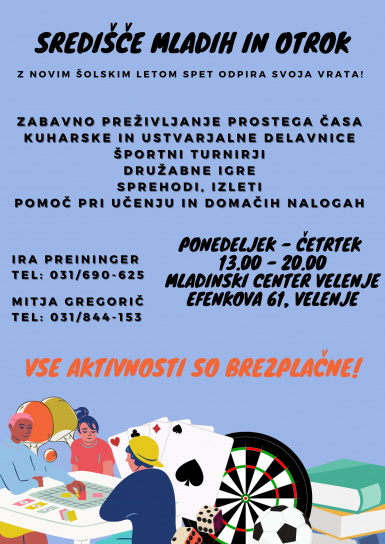 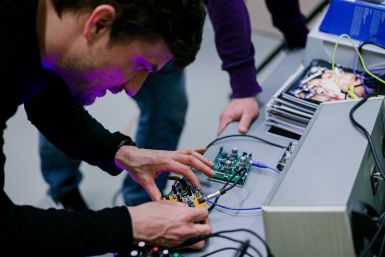